Saturday
Saturday saw a visit to the woods to use the high net for the first time and receive a reminder about how quiet March is for catching birds. We struggled to make it to three birds, with the first round giving us a new Song Thrush, soon followed by a new Treecreeper. 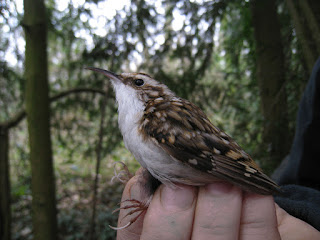 Bird of the day!﻿
A single re-trap Long-tailed Tit graced the high net. Still, we had bacon sandwiches to fill the void, so all was not lost and besides, we found a new role for our manic mascot Ti – or “Delia's Apprentice” as he is now known. 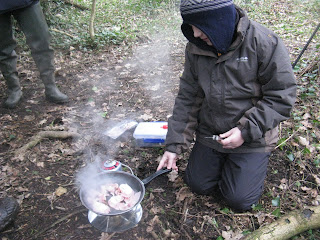 Ti shows the group that Delia ain't all that
Sunday
A leisurely lie-in was befitting a Sunday, so it wasn't until 10am  that we headed to Cadaxton Ponds to open up the rides and establish some new ones. Working in a reed bed was a reminder of the up coming season of summer migrants soon to be gracing an air-space near you. Even with the mandatory break for sausage sandwiches, ride clearance took no time at all. Foolishly we decided a lunchtime trip to Cosmeston to catch ducks would be a good idea… a combination of kayakers, dog walkers, children and people ensured a dearth of catchable fowl.
Cardiff Ringers are not easily deterred and we turned our attention to reading swan rings instead. Without binoculars this turned out to be a little trickier than first thought. Heads were turned (possibly in adoration, most likely in disgust) as we put on a cracking display of builder’s backside while getting in amongst a ravenous horde of big, white, bread-eating machines to read rings. You have not lived until two, large, male mute swans decide to have a melee inches from your head. Although we managed a good dozen or so ring numbers, we decided to call it a day and returned to our respective abodes to fail at catching garden birds…
Posted by Cardiff Bird Ringers at Monday, March 07, 2011