Yesterday I came across the orangest Greenfinch I've ever seen, brighter even than any I've handled in Spain. The picture shows two adult males, 'normal' yellow on the left. 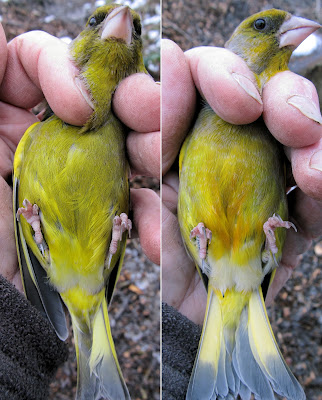 Clocking in at a mighty 33.6 gm, he's the heaviest I've ever had too, beating the second heaviest - the bird on the left - by 1.2 gm. Apart from these two, the heaviest I've had was 31.6 gm, a bird in Aberdeenshire in December 2006. Neither of these two was exceptionally long winged, at 91 and 89 mm, and neither was carrying any significant amount of fat.
Posted by Chris Jones at Tuesday, January 22, 2013 1 comment:

Blackbirds in the green...

Recruiting blackbirds to our project is either a labour of love, delusion or insanity. Either way sometimes it pays off like this morning when we managed to the 28th individual for the project.

However, its the by catch that made this morning, and Facey's day when a green woodpecker rocked up in one of the nets. The rest of the by catch comprised the usual - blue and great tits, a robin and a wren.

Looking through last year's swallow project notebook this evening has me looking forward to this coming season with more enthusiasm than normal and pondering what it will hold. Will it be a success? Will it be an out and out failure? A review of 2012 showed that you never know until its over. Despite the appalling summer, and a few false starts, 2012 proved to be the most productive season since the project started in 2006.
Despite being one of the wettest summers on record, 139 young swallows (from 159 eggs) fledged from the stables last year, beating the previous best  by seven (from 177 eggs in 2009). Its a far, far better total than 2006 when only 69  young (from 130 eggs) fledged in what was a very hot and dry year.
The Riding School, along with the Blackweir Ambulance Station make up the core area of our RAS project. We only started monitoring the BAS in 2011 so its hard to draw any firm conclusions but the colony here was up from 3 to 5 pairs in 2012. Nest recording here is a little random but we know at least 16 young made it off the nest; not bad for a site that backs on to one of Cardiff's main roads!


These two sites are within two of the three large parks in the centre of Cardiff (you can see the Millennium Stadium from the stables!) and between them saw at least 150 young fledge in 2012.
Posted by Rich Facey at Wednesday, January 02, 2013 2 comments: