The Day We Dipped

Sometimes the stars align, the fates smile and work and pleasure combine. This they did this morning, with a much needed site meeting at a reserve allowing a bash at catching Dippers and a kick start for a new project for the Cardiff Bird Ringers.
Waders were donned and our local guide, Sherpa Solman, showed us to a perfect spot on the river with hardly a rock unadorned by a dipper’s splash. No sooner was the net up and we had sat back to indulge in a cheese are tartar sauce sandwich (don’t knock it until you’ve tried it) than a Dipper flew square into the bottom shelf – it’s been a long time since a certain Cardiff Ringer has had to move so fast. And fast he moved, and as gracefully as a hippo in heat. A magnificent female dipper was soon ringed. 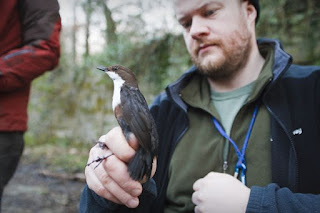 Having seen a second bird fly over the net, we decided to wait. Queue another cheese and tartar sauce sandwich and Boom! Number two in the net. This time a male, who as he was released called out (in Dipper) “I only came out for Caddis flies you…” The remainder of his call, sadly, drowned out by the river. 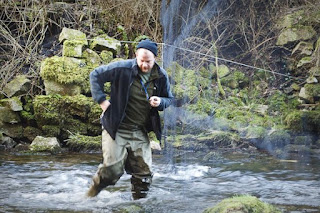 Bless, some mothers do 'ave 'em.
With two and a half hours until our meeting there was only one thing for it. We decided to decamp to the other end of the reserve for more Dipper fun. Another perfect spot courtesy of Sherpa Solman that seemed to be blessed by the Gods of Ringing as a Dipper was seen straight away. 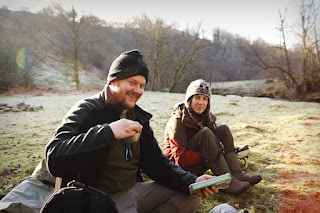 Sherpa Soman providing care in the community while waiting for another Dipper
This part of the river was shallow so Dr Oenanthe decided to be brave and set the net this time. Ten minutes later dipper number three! The Gods are fickle for the bird did not stick in the net, and Dr Oenanthe, not being Usain Bolt, was unable to get to the net before it had escaped. Minutes passed like hours. A Grey Wagtail came and missed the net. Then came back, flew into the net but decided it wasn’t in the mood and left. Two dippers taunted us up stream for some time before we decided it was time to call it a day and start the day job.
Posted by Cardiff Bird Ringers at Friday, March 04, 2011