Brrr its been cold, which is probably why we haven't had a repeat of this sight in the CCW bird observatory, despite it being late March.

But a pair of ducks have been frequenting the office quad more and more recently. As one eagle-eyed colleague noticed the female of the pair was ringed, Facey whipped out his might midget (naughty) in order to read the ring. And lo GR38123 was spotted.

She was one of four ducklings ringed at the site in 2011 and this is the first we've heard of any of the brood. They took a bit of catching that year but we learnt, improved our technique and so we should be able to ring GR38123's ducklings (if she has any) more quickly than she was.
﻿﻿

Suddenly they're everywhere. Six new Chiffchaffs ringed today, first migrants of the summer to come, including this one sporting both a 'pollen horn' and a 'pollen lump'- sure evidence that it's been spending the winter somewhere sunny with its face deep in flowers full of nectar and pollen, i.e. probably not in Cardiff.

These accretions always seem to disappear pretty quick once the birds start poking about in our damp vegetation, and certainly don't seem to cause any inconvenience. 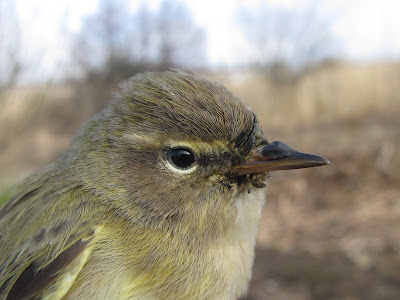 Sometimes the Gods of Ringing really try your patience*. Needless to say several blackbirds went un-colour ringed this morning due to breakage after breakage. The air was a dark blue. Hot drinks were needed not only to calm the nerves but also take the brittleness out of the colour rings, sadly none were available. Still it was a nice morning and a good excuse to have a bacon sandwich!

*the happier version of events will be found on our sister blog www.cardiffblackbirds.blogspot.com later!
Posted by Cardiff Bird Ringers at Thursday, March 14, 2013 1 comment:

Just when you thought you had your ringing site nicely established... 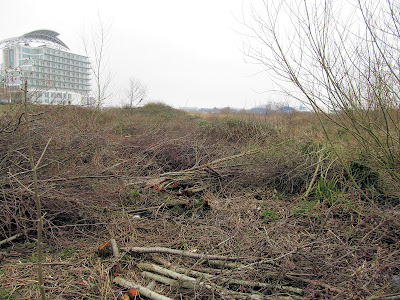 That's why the Cardiff Bay Wetland Reserve can never be a Constant Effort Site, and also explains a certain lack of activity on our part over the last month or so.