It almost goes without saying that The Cardiff Ringers are basically The A-team of the ringing world.
Let me explain...

Both consist of highly decorated renegades that appear to be wild and out of control but in fact have a deeply ingrained inner discipline and respect a military-like command structure.

Both always act on the side of the good and help the oppressed.

It was on one of these commissions that 'B.A. (Bearded Acrocephalus) Baracus Vafidis was out helping the good of Cardiff University and the oppressed of the Wildlife Trust, that he liberated this little traveller caught in a commie net- in desperate need of a ring on its leg and immediate enlistment into the BTO database. He took pity on the bird and obliged him his requests.

All quiet on the netting front

The session at the Bay was quiet and slow this morning, with the combined totals for bluti's and greti's out numbering chiffs. In fact residents out numbered migrant species in our 16 bird catch; a sure sign that the summer migrant tap is soon to drip dry.
﻿ ﻿
Here are some views from the end of one of the rides. As we said, it was a quiet morning. Lots of tits. 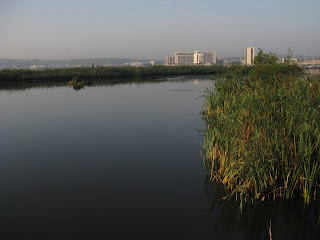 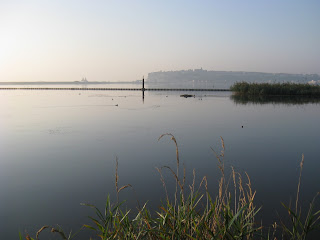 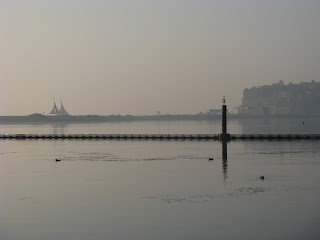 * (The early 19th century philosopher Søren Kierkegaard, posthumously regarded as the father of existentialism, maintained that the individual has the sole responsibility for giving one's own life meaning and with living life passionately and sincerely, in spite of many obstacles and distractions including despair, angst, absurdity, choice, boredom, trainees, and blue tits. (CJ -Ed.))﻿
Posted by Cardiff Bird Ringers at Thursday, September 29, 2011 1 comment:

Now we know some of you read that and got very excited but don’t be silly, when would we get to ring one of those?
Back in the 17 March this year, Dr O was busying himself collecting data for his PhD* at . For some reason he let his attention stray from his studies and caught sight of a wing tagged Montagu’s Harrier. And low he did report it. (Well, after much trying to find out whom to report it too. Eventually he tracked down the bird’s tagger.)
EA644499 was ringed as a chick on 28-june-2007, at Le Clos Brien, 49, . 993 days and 3717.8 kilometres later she was spotted by Dr O in . Birds eh? Got to love them
*entitled “Fings I likes about Wheatears by Adam Seward aged 33” and due to be handed in this week. As one of the group finishes a PhD, another starts one - circle of life people, circle of life.
Posted by Cardiff Bird Ringers at Tuesday, September 27, 2011 1 comment:

A contingent of the Cardiff Ringers crossed the border into Lloger (that's England) to join in a catch of Curlew with members of SCAN and others.
With the nets set yesterday we just had to  turn up, cram ourselves in to the back of a Toyota thing (very cramped) and wait for the sound of canon fire. Then there was the very enjoyable fast drive to the catch field by Coker McRae.
Bailing out and running as fast as our wellie clad legs would lets us to the nets, we covered the birds to keep them calm while they were extracted. 30 birds in the net which kept us busy for a while.
All the Curlew were colour ringed as part of a BTO study - so keep an eye out for them, especially when scanning curlew roosts. More importantly don't forget to report them!
﻿
﻿

The sessions down the bay on Friday and Saturday between them totaled around the 50 bird mark, with Chiffs making up the majority of the catches.

The steady trickle of birds was at an ideal pace for the trainee's, especially for our newest addition, Anthony Hallam. Anthony, or Thon, has just moved back to Wales having completed an MSc and where he was training to ring. Despite being a veggie and T-total we can vouch that he is actually a ringer.

If the trickle of summer migrants through the bay wasn't reminder enough of the coming winter, then a visit to the stables to count roosting swallows was. Only two birds, 1 adult male and a juv appear to be all that's left of this year's breeders and offspring. Until next year our fork-tailed friends.

Speaking of swallows. We had another bash at a swallow roost on Sunday resulting in a bumper catch of 1 reed bunting, 1 blue tit and 1 sedge warbler. Our waterfowl catching was somewhat hampered by the sheer quantity of bread being fed to the the quackers on what turned out to be a Sunny Sunday.
Posted by Cardiff Bird Ringers at Monday, September 26, 2011 No comments:

We did get some variety, with this little gem being bird of the day... 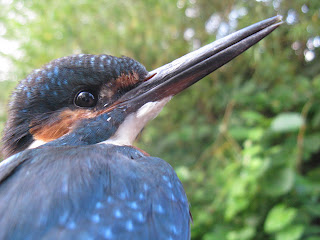 We've caught several kingfishers this year and one thing we've failed to capture is the mad twisty-wrynecky-woodpeckery-thing they do with their heads. But to day we managed it.
﻿
It can be far more extreme than this with their heads doing nearly 360!
We also bagged a little flock of goldfinches. Now we don't like to get too technical but here we go. The picture below shows a male and female of the species; left and right respectively. The female if you look closely has pale nasal bristles where as the male's are black. Its not totally clear in this image, mainly because they are in moult, but the red on the head extends beyond the eye in male but not in the lady finch.
CJ was left manning the site, while the rest of us headed to work or thesis writing, and it proceeded much the same... ending on 75 birds.
Posted by Cardiff Bird Ringers at Wednesday, September 21, 2011 2 comments:

... for another picture. The latest session at the Bay produced, among the usual suspects, 32 Chiffchaffs and this new Cetti's: 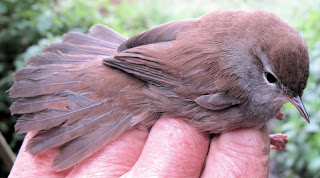 Posted by Chris Jones at Tuesday, September 20, 2011 No comments:

The weather over the weekend wasn’t exactly conducive to the activity of ringing. Lie-ins were had. Wrynecks were seen. The weather cleared in the evenings and so it was to Cossie we went in search of roosting swallows. And boy were we successful: 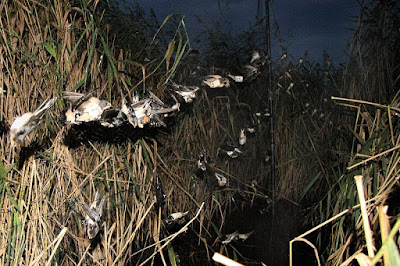 Of course that wasn’t our catch at Cosmeston – where the hell do you think we’re based?
We had success by our measures in that, we went out to catch roosting swallows and that is what we caught… 3 in total…and 9 sand martins. That Is Success.
While we were waiting for the nets to err… ahem… fill, we kicked off the waterfowl season, ringing six mallard.
Earlier in the week, we had another bash for chiffies at the stables. They were thin on the ground but it wasn’t all bad.
﻿ ﻿
Posted by Cardiff Bird Ringers at Monday, September 19, 2011 No comments:

A trip to the bay yesterday and 51 more birds in the bag - well several bags, not all at the same time, and they were only in them a short while.

Among the morning's customers was this fella:

﻿
Magpies aren't the easiest of birds to catch, with this being only the fifth we've caught down the bay.

(And a Lesser Redpoll, CJ Ed.)
Posted by Cardiff Bird Ringers at Friday, September 16, 2011 No comments:

Email ThisBlogThis!Share to TwitterShare to FacebookShare to Pinterest
Labels: Magpie

Yesterday evening could have ended on a low. The last chance to catch(up) with swallows at the ambulance station at Blackweir lack one vital ingredient – swallows.
As the evening was young, RJF took CJ on a tour of ’s premier swallow site; . Swallows weren’t our aim. It was time for a bit of birding and a poke around to show CJ the site. It soon became apparent that chiffs were on the move as the site was hopping with them; one particular “hedge line” was very busy. When the Gods of Ringing put catchable birds in front of you there is only one thing you can do – go back to the car and get the nets out.
Two 10ft nets, a lotti tape, and some expert herding later and 8 chiff and 2 bluti were ringed. Surprisingly the bluti were not retraps, despite us having ringed what seemed like a ring string's worth of pulli there this year*.
Eight chiffs, we will grant you, is not a huge number – we can catch that in a net round down the bay. But for RJF, who has spend many a year trying to make the site “work” for species other than swallows and tits in boxes, this was a veritable fall of small warblers, the first time the species has been rung at the site, and he was most pleased. RJF now has something new to do of a September evening!
Katia seems to have finished providing ups with windy weather, which is a relief, so hopefully we can get our while we still have migrants on the move.
*this is of course a complete exaggeration.
Posted by Cardiff Bird Ringers at Thursday, September 15, 2011 No comments:

September at first seemed full of promise. The 162 bird session down the bay had us looking forward to masses of migrants. But noooo the Gods of Ringing seem to have decided that wind and rain should be the order of the day. To date we've managed naff all in the way of ringing at the bay. In fact naff all of any ringing. Our pliers may begin to cease.

Saturday we took advantage of the lack of rain, and headed to the stables to ring one of the last broods of the year; four more swallow chicks to add to the database. We also took the opportunity to catch some recent fledglings and adults that have finished breeding. Not expecting much in the way of new birds we were surprised to catch a new adult swallow entering the stable of a known pair. Even more surprising was finding that this particularly bird had started its body moult. He/She was probably prospecting for a nice place to breed next year. The experience was also a new one for Billy Whizz who not only got to ring his first swallow pulli but also his first experience of nest mites! We know how to spoil our trainees...
Posted by Cardiff Bird Ringers at Sunday, September 11, 2011 No comments:

Another Bonanza at the Bay

Gilbert White obviously had something to say about Spotted Flycatchers but he failed to mention that they are like buses; they all show up at once! Two Spofl and a gropper (4th for the site) were joint birds of the day among the 162 birds caught at Cardiff Bay on Sunday, with the weekend total close to 200!

Sunday's mammoth session had been billed as a "quick session" but the birds kept on coming; mainly Chiffs and Willwas but with good numbers of Sedgies thrown in for good measure. Surprisingly, despite being one of our best days this year, we didn't turn up any controls. But we do hope that some of "our" birds from today grace the nets of others or otherwise turn up to be reported from far flung places.

A technical tip: we have found that playing "Ride a White Swan" by T-Rex on the way to a ringing session greatly increases the chances of a good session. Cause and effect or just plain old coincidence?
Posted by Cardiff Bird Ringers at Sunday, September 04, 2011 1 comment: