Late in the Season

Swallows seem to be particularly unpredictable this year. I very recently received permission to ring at a farm where a surveyor counted around 40 breeding pairs. Permission seemed to come far too late for me to do much of anything, but reports from a few colleagues around the UK, including the venerable Facey, suggested it was worth a shot. It seems that while some birds have finished breeding for the year, others are occupied by their second broods and still others have laid their third clutch.

I got out to the farm yesterday to find all three scenarios in one place. The vast majority of nests were empty, two had chicks which will have fledged in  a few days time, and several contained eggs. Only one of the clutches was definitively cold so there's the possibility that some birds are trying to get one late brood in. I'll go back in a week or so to double-check.

I don't have short nets to cover exits but did manage to find space for a 12m and caught one adult female while we were there. It wasn't evening and the sun was low, so the nets were far too visible.

There were plenty of swallows feeding over surrounding fields. If I have time I'll try to figure out where they're roosting.

The Eyes Have It

A very quiet morning at Cardiff Bay yesterday was very much a case of "quality over quantity". A meagre catch of the usual warblers was punctuated with a new Cetti's, a Kingfisher and a species we don't catch very often...

So a little while ago me along with my very small car and even smaller tent trundled off down to Abbotsbury to round up some swans! 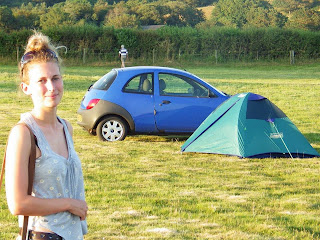 As usual the day started nice and early which was thoroughly appreciated after a blustery night in the tent! The canoeists headed out on to the water and the volunteers began to walk out into the shallows in order to guide the moulting and therefore flightless swans into the pen. With some gentle encouragement and only a couple escapees, the swans were quickly penned up!

The ringing stations were set up and the swans began to pile in, of course directed straight to the trainees! From what I heard there was a food station where hot dogs, burgers and sandwiches were available but I'm sure Rich will be pleased to here that a swan-free moment was never found to sample any!


By the end of the morning all swans were ringed, weighed, measured, sexed (which was interesting....) and released back onto the water. As great as the day was I must say I am glad its a biennial event as I feel it may take that long to recover!
Posted by Cardiff Bird Ringers at Thursday, August 01, 2013 2 comments: