An Inlet Full of Oyks

Yesterday saw the Gower ringing group head out to Burry inlet with the hopes of netting a good number of Oystercatcher. It was touch and go for a couple of days but favourable conditions and a large flock led to Billy Whizz, Tai and Thon heading out for some time on the sand.

It took a while to fire the nets as the birds weren't being entirely cooperative and were also being shepherded by a thoroughly unhelpful crow (which was also netted and ringed). Once fired and with everything up and running, Tai somehow took over organising the holding pens and even got to ring a few birds himself.


The total catch came in at 172 birds with 10 re-traps and one crow. Thanks to everyone who organised and attended the catch for making it such a fantastic day.
Posted by Cardiff Bird Ringers at Sunday, January 15, 2012 No comments:

Don't You Just Love It?

Age and sex please you trainee types, and your reasons. 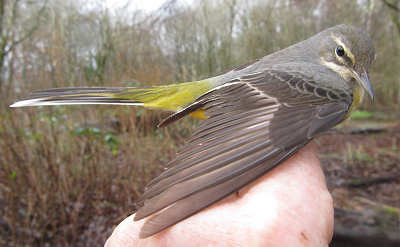 
And it's a female, that's not a white stripe, just the top of the white throat area. If there was going to be any black male plumage it would have been visible by now.

Our premier site is without a doubt , so it is worth taking a look at the totals for the site from 2011.  Last year proved to be a pretty good year; in 68 visits we totalled 1401 new birds. Compare this to 2010 when we caught 1546 in 107 visits! This means that we were either very fortunate to hit the big days in 2011, or more likely there were just more birds about.
Although we did only manage to add one new species to the ringing list - Spotted Flycatcher. 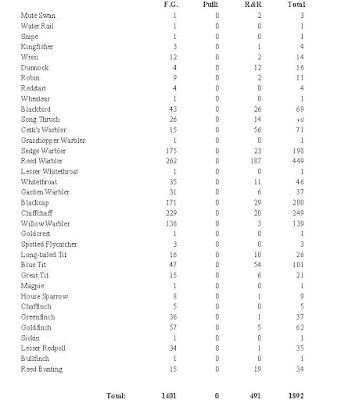 Posted by Cardiff Bird Ringers at Tuesday, January 10, 2012 No comments:

With 2011 behind us, it’s only fitting to have a quick squint of what we achieved last year; which was the Bull and Morgan Partnership processing 3504 captures! Not a bad years ringing it has to be said. We managed to add seven new species to the list, starting with Black Redstart at the beginning of the year and ending with Black-headed gull; in between there was Redshank, Dunlin, Herring Gull, Greylag and Canada Geese. We started colour ringing coots and Cetti’s Warblers and finally registered the swallow project as a RAS.

2011 was not without other milestones; we said good bye to one of our founders, Dave Bull, who taught most of us our trade and is sorely missed. But we also welcomed new members to the team; CJ, Thon, Wayne and Prince Albert. And of course not forgetting that Vaf was able to start on his long awaited PhD!

We’d like to extend a big thank you to all the other ringers and ringing groups that played host to us in 2011, in particular; Terry Coombs, Brian Bailey, Mike Hounsome, SCAN, Llangorse, Flat Holm, and of course our home away from home, The Radipole Ringing Group.

2012 is underway and we know for sure there will be some ringing adventures being had by the team.

Posted by Cardiff Bird Ringers at Tuesday, January 10, 2012 No comments:

This weekend's ringing here in was a bit of a mixed bag. Saturday we were at the bay, a little mob handed for the meagre 10 birds that graced our nets (1.4 birds each…). For a change for this time of year, we only caught one blue tit.

Sunday morning saw CJ and Facey trying for gulls at , with their gull to bread ration being 0:5. The gulls were just not interested, with even the swans and geese apathetic to the feast on offer. Lessons learnt:

Sunday evening saw a return to the bay for a starling roost catch. Over the last month or so between 1000-1500 of them have been roosting at the bay. The spectacle of murmurating starlings was enjoyed with a mixture of awe and gut wrenching anxiety as around 1500 starlings dropped in on the net ride. We caught 17. Some may say a meagre offering considering the numbers at roost; these would be people who have not had to extract more than one starling.

We also had a net up for roosting waterfowl/wader types. While we extracted the starlings near by, Ti gave us reports on the other nets contents and displayed excellent initiative (which he proceed to recount for most of the evening); he’ll make a good ringer that one. Three Redshank were bagged and as we processed our wader and starling catch a mallard dropped in to round off proceedings. Both species new for the site.
﻿
﻿﻿﻿﻿﻿﻿﻿﻿﻿
﻿﻿﻿﻿﻿﻿﻿﻿﻿
﻿By the end of play Sunday the weekend’s totals stand at:

On a more personal note we said farewell to Dr O who moved to Northumberland to work with rusty tree rats.
Posted by Cardiff Bird Ringers at Monday, January 09, 2012 2 comments:

A Bird in the Hand

As the winds have finally died down enough to allow for some mist netting, I put up a net for an hour before work. 14 birds later I was quite pleased to be holding a new species for the site:
Two were caught at the same time but only one stuck. The rest of the session was typical for the site (retraps in brackets):


*two or three of these chaps were retraps from the very first sessions fopr the site, so are knocking on a bit now.
Posted by Cardiff Bird Ringers at Friday, January 06, 2012 No comments:

Our first outing of 2012 was to catch coots at Cosmeston and by close of play we had managed three of them, and two swans. Catch success was hindered not only the birds being wary but by the weather. An ominous black cloud formed over the lakes with a flash of lightning signalling that thunder would soon arrive. When it did it not only made us jump but also scattered the birds! After that the hail set in and things went down hill; processing coots in a hailstorm is not an enjoyable experience.


A Whooper Swan has been hanging around the lakes recently and this morning was in the mix with the mutes. It was catchable but as it was wearing a bring orange Darvic there would not have been much purpose to that! Apparently ringed in Worcestershire in 2010. You can see a selection of images of it here.