Sunday is a day for enjoyment. A day for relaxation. A day for pastimes. The Cardiff Ringers are no stranger to enjoyment and relaxation, especially the kind that is measured in pints. But this Sunday, The Ginger Fishermen found some new pastimes for us. A nice walk in the countryside followed by some tree climbing and three feathered pastimes were inducted in to the ringing scheme.

A big thank you to the ringing demi-god that is the leaser of Ruffled Feathers for the opportunity.
Posted by Cardiff Bird Ringers at Monday, August 08, 2016 108 comments:

A break from nappies (a poem by CRG)

to start the day,
a break from nappies and milky sick,
to put up nets upon a stick.
Chiffs and willows taking flight,
lesser and common white.
time to go but I'm still happy,
I'm needed to change another nappy. 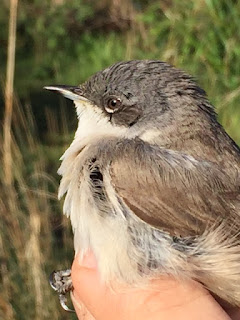 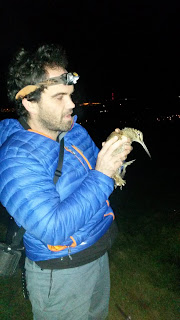 As the gentle folk of the UK battened down their hatches and settled into their favourite slouching positions in last nights' storm, two intrepid ecologists braved the wind and rain in search of Muckle Snippecks, gobbling worms on the common grounds of Pen coed. Although Woodcocks (as we prefer to call them), are often described as 'one of the best examples of camouflage in the world of nature', all the stripes and brown feathers in the world are no match for a big bright torch and a massive landing net.  We have tallied only 9 this season but we have a string of metal rings to use before these marvellous creatures disappear northwards. 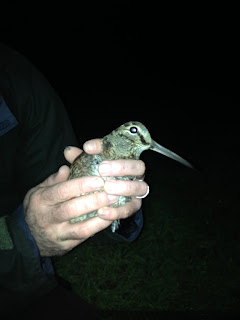 The Cardiff Ringing Group is composed of conservationists and scientists (which can sometimes, but not always, be the same thing). As such, the group strives to contribute to the understanding of the ecology our avian cousins- (especially those with funny names). It shames us to admit it, but most of our endeavours in this regard, result in total failure. However- with persistence and learning, we can succeed... 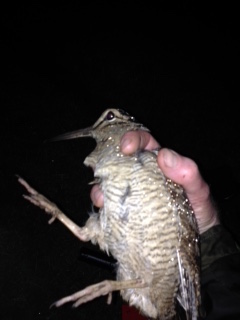 As is tradition for all new CRG trainee recruits, the new year began with testing the steel of our newest members: John and Claire. There is a craft to stalking and capturing a mute swan; the trick is to look unimpressed and uninterested in the birds and gaze out into the distance as if counting the new tufted ducks you plan to catch (it also helps to picture the bacon sandwich you'll soon be eating from the cafe).  Then, once in pouncing range, and after checking the bird doesn't already bear the markings of a BTO-endorsed previous encounter, pounce; pounce fast; pounce with precision and accuracy. All too often trainees will show hesitation, deviation and repetition - all hallmarks of failure- and guarantees of having to shell out for the bacon sarnies.

When I watch Richard pouncing onto an unsuspecting mute swan, I am often taken back in time 12,000 years to the early Holocene to observe the successes of a well fed and successful swan hunter- I suspect that I too bear a similar (albeit Neanderthal) resemblance.

I am happy to report that the new crew show promise; (they were not afraid of the honkers and they had a go- good enough I suppose!) 6 more swans with blue rings (C077-082).

In related news- we have had a couple of recoveries of swans (Burnham on Sea -somewhere abroad I reckon) and roath park lake (again). Another coot has ended up in Manchester (Kane Brides must have been on tour).
Posted by Cardiff Bird Ringers at Monday, January 11, 2016 7 comments:

Keeping the CRG in the Lime Light

As role models and peers to the other ringing groups in Wales and indeed, the UK, its very important for the Cardiff ringers to occasionally feature on TV providing world class Friday night entertainment. On this occasion (aired on New Years Day) we were assisting Prof Ormerod relay the importance of River water quality to biodiversity to the ITV viewing public with the legendary Ray Mears. I suspect Ray has seen many bird extractions in his career, but we could sense his awe. Its tough maintaining high standards....

check it out in full here
Cardiff Ringers ringing with Ray


The dipper ringed was later recovered this winter (a year or so later) by half man, half ringing god Tony Cross, who quipped 'the dipper must have picked up a couple of survival tips from Ray!'