Hot on the heels, although not necessarily hot off the press, is news of more recoveries and controls.
Up first comes the macabre news of swallows from the ’s Class of 2010. Ringed on July 27 as a ten day old nestling, X558661’s life seemed full of potential with the promise of overseas travel. Sadly this was not to be as 37 days later, X558661 was found dead at a farm in Monmouth 43 km from his place of hatching.
But at least X558661 got to see some of the world, well a bit more of . X558674 didn’t even make it out of the stable being found dead nine days after being ringed, a whole 2m from where he hatched. We are not quite sure why the BTO deemed fit to tell us of X558674’s demise, considering it was we that told them in the first place.
X558674 and X558661 may your souls fly to where your bodies can not. 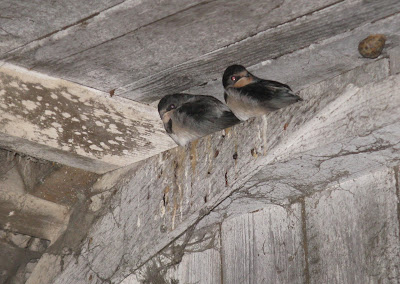 Related image - X558674's siblings shortly after his untimely demise.
The snail is not a relative.
Cheer up, some birds do make and T555232 is proof enough.  We caught this chap on our very first outing to a sand martin breeding colony last year, almost five years after he was first ringed as a first year in 2005, 52km away in the . Nice going T555232, hopefully see you this year.
Posted by Cardiff Bird Ringers at Friday, March 11, 2011