We convened early Sunday morning for the first sand martin ringing session of 2011 on the River Ely. We don’t get massive numbers at this site but the river probably contains a significant number of Glamorgan’s sand martins. Last year we managed 65 birds at one colony, including a control, in two visits. It was out first attempt at the species after all and the third had to be cancelled so this year we are hoping for better numbers.
﻿
﻿This session was somewhat hampered by the wind. Sand martins don’t “stick” to nets like other species, and with a wind just strong enough to open the pockets sufficient to allow some of the birds to get out our catch was some what diminished. Our finishing total of 27 could have been at least a third higher again. Catching more are what repeat visits are for!
For Billy Whizz, this was his first outing to a sand martin colony; which we think he enjoyed judging by his “Oh Heck!” (or similar words involving H’s and F’s) as the birds emerged from their burrows. This was also BW’s and Padwan’s first experience of a net properly full of birds and they handled it well, although one may have to check in his wing rule for calibration…!
We were graced with the presence of the Cardiff Bird Ringers’ youngest and most energetic members. Ti has many uses in the field – entertainer, cook, and most recently bird bag holder:
﻿

p.s. Forgot to mention - some of the birds, far more than last year, were carrying huge ticks. 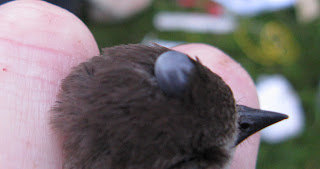