The Swallow Season So Far

Swallows have arrived thick and fast at the stables, with at least 17 individuals from previous years being so far re-sighted and a few unringed birds and those we are yet to find out about thrown in for good measure.
Among those that have so far returned are WYPM and SRPM. Both hatched at the stables in 2009 and are son and daughter respectively of of LVOM who we told you about previously (although you never can tell who daddy is with swallows) . Its also good to see OBPM. She hatched in the same year as WYPM and SRPM. Don’t worry we won’t go through the life history and relatives of all 17 birds… 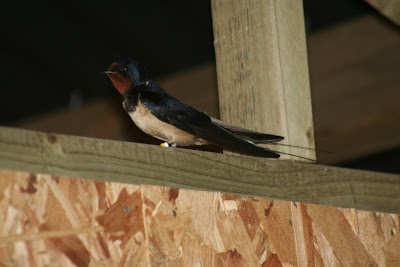 WYPM -White over Yellow, Pale blue over Metal
﻿
Nest checks have commenced in something like earnest. Eggs are being laid left right and centre but mainly in nests. The date of the first egg, April 30, was two days later than last year. The first check of the year was something of a reminder of the perils that lay ahead for some of this year’s offspring. While moving a box we came across the desiccated remains of LYLM, a bird we thought had made it off the nest, wedged behind it. 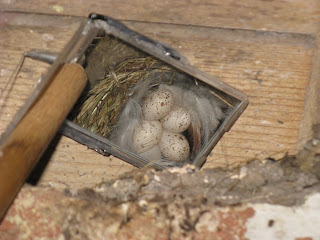 A near complete clutch of swallow eggs viewed through
the hight of technological developement - a mirror on a stick
This year our swallow project stretched its wings a little farther and we have added a couple of other sites to the mix. We’ve only visited one of these so far, the Ambulance Station at Blackweir, where the birds have been largely uncooperative on the whole; only one of the two pairs have posed for their picture – they were unringed.
Posted by Cardiff Bird Ringers at Sunday, May 08, 2011