Yesterday saw us at Cardiff Bay with a session that turned out no only to be productive but also well timed; we packed up with plenty of time to spare before the rain came.
We ended the day with the details of twenty birds safely in the note book, including several white throats. Bird of the day went to this little chap: 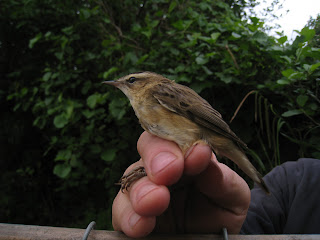 Yes, we catch a lot of sedge warblers but not many with a French ringing scheme ring! Our first international control of 2011! Speculation is already rife within the group as to where the bird was ringed – outside money is for a reed bed in Senegal.
If the SEDWA took first place then second has to go to a female mute swan, which while being fed the remnant of sandwiches proudly displayed her pale green DARVIC ring at us. The last time we encountered a mute swan with a pale green DARVIC was at Cosmeston lakes and was on a bird released by the RSPCA – so bets are that it is a similar situation here. 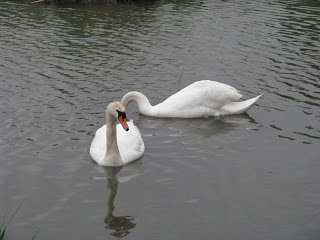 The lady with the darvic is on the left
We’ll keep you posted on the details of these birds and remember you heard them here first. Well possibly from someone else in the case of the swan if someone has already reported it…
Posted by Cardiff Bird Ringers at Sunday, May 08, 2011