Ringing activities over the bank holiday weekend were some what curtailed by the obnoxious weather – too windy or too wet.

We did manage a session at Cosmeston Lakes on Friday which resulted in 16 birds at the site 1 reed bed. With JOV having mentioned that we’ve caught swans in May we decided that a bit of early summer waterfowl catching was in order. So with the nets down, and not having swan rings with us, we headed to the “jetty” with plans to tag some ducks and coot. 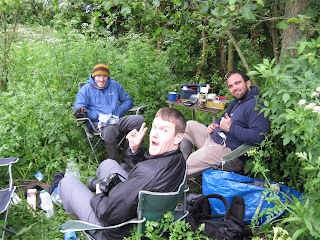 Padwan Shewring, Jimmy Boy, and Dr O
It would have come as no surprise to the regulars of the lakes that there was bugger all about on the waterfowl front; a hand full of mallard, coot and even the usually abundant and ever present swans were thin on the ground. As we failed to attract anything quack-esque close enough to catch, we turned our attentions to reading swan rings. Even they weren’t playing ball and it became necessary to switch from the “read in the field” to the “read in the hand” technique.

No sooner had I picked up a swan than “Put The Swan Down!” was bellowed from one of the fluorescent vest clad park attendants. This was recited several times as I tried to explain that we monitoring the birds and had permission to do what we were doing – an explanation that seemed to be met with eventual approval as the attendant nodded and voiced an “OK”. That and the boys in blue didn’t turn up.

Friday evening saw Dr O and me accompanying John Hyde to gift broods of redstart, pied wagtail and swallows with uniquely numbered bracelets. While John busied himself with the latter, I decided to show Dr O a method of catching adult swallows coming out of stables that doesn’t require a 3:30am start. For twenty minutes we ran back and forth the farm yard trying to catch swallows as they exited their stables. We nearly succeeded having two swallows in the net, but sadly they didn’t stick! It usually works, honest.

Speaking of swallows; the first chicks at the stables have been ringed, with the first brood on Saturday and two more yesterday bringing the total to 14. More should follow suit this week. Since 2009 we’ve also looking at the bird’s diet by collecting poo. Last year was the year of constipation, with few broods giving in the name of science. So far this year they have been more than willing to do their bit.