With clouds threatening rain, and about 100 swifts flying over the waters of the bay a soon to bedraggle crew headed to Flat Holm Island on Friday for the annual gull count, an activity not for the faint of heart, that was to take place the next morning. 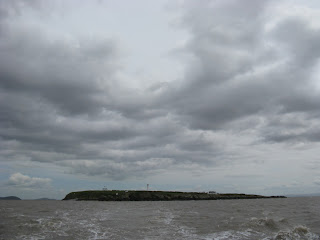 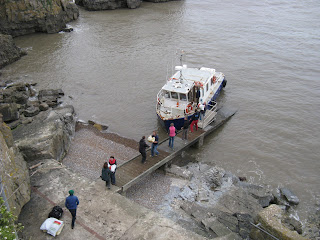 Depsite the ominous looking clouds the rain stayed away and with Friday afternoon to do with want we wanted our thoughts of course turned to ringing. Sadly the wind was out in force so mist netting was largely out of the question. The only ride that would have been usable, being sheltered by the old cholera hospital, had been incoviently occupied by three pairs of gulls so was largely unuseable by those that did not wish to have gull shaped holes in their nets. In the end we settled for using traps which was good experience for the trainees present; the experience being sitting and waiting while, for the most part, the traps remained empty! With several thousand gulls knocking about, Flat Holm is not exactly hospitable for the resident passerines which tend to lay low. We managed to get ourselves a robin in the end. While a rock pipit completely ignored our traps, some of us took to looking for some of the island's other inhabitants: 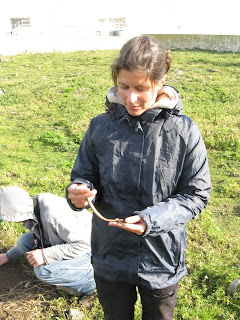 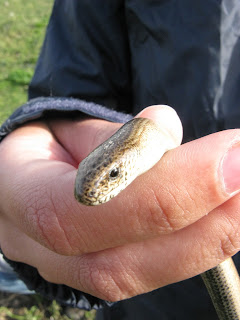 A close up of the slowworm

After a good feed and a few bevies the night before, we were up early for the main event on Saturday. Armed with cans of biodegradable spray paint we headed out into our respective areas to mark and count the nests of lesser black-backed gulls. The gulls, of course, did not appreciate our attentions and showed as much enthusiasim for showering us in shit and stinking vomit as we did for nest finding and marking. We could say that you have not lived until you've had gull crap in your ear, and gull vomit down your neck. We could say that but we won't. 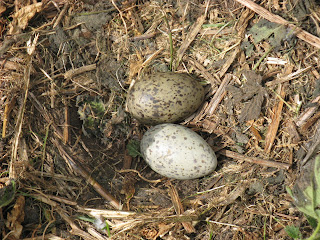 Our quarry for the morning - gulls nests.

But to be honest, the worst part was not the vomit or the crap - that is just what you expect, and probably deserve, when wondering in to a gull colony. Nor was the occassional smack to the head, cushioned by a hard hat. No, the worst part was the fly by assult on the audial sense of a gull screaming "WHAORAH!" very loudly and unexpectedly behind you. The result on several occassions, apart from potential heart failure, was the near evacutation of our own bowls from the fright. Luckily this did not happen.

Such activities may not endear gulls to people, and you could understand why they have such a bad reputation. But if the masses of gull haters laid eyes on a nest of fluffy gull chicks they would understand why these birds defend thier nests so aggressively. As we didn't dare take our cameras out on the acutal count, you'll just have to take our word for it that gull chicks are well cute. 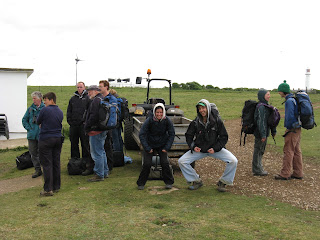 Even two days on the island can affect the
mental state of some people....

We are hoping to become more aquainted with the island over the coming months and years as the Cardiff Ringers are helping with ringing on the island. Not only with the shithawks gulls but also with our more usual fare in the form of migratory passerines.