Swallows at the Stables

This time of year sees us out and about trying to take pictures of the arse end of swallows. No, not some strange Welsh ritual but an attempt to work out whose back and whose still stocking up on flies in the duty free by getting photos of colour-ringed individuals. Since 2006 we’ve monitored the swallows breeding at the using conventional metal and colour rings. We’ve told you something about their offspring from last year, but this time lets talk grown ups.
Although as of Sunday, ten birds were back, only two have been cooperative and allowed us to photograph their legs; they just won’t sit still! First individual back was BW:OM (Blue over white, over Metal), who arrived at his stable on April 3, a cool four days earlier than the first birds in the last two years. He was closely followed by VL:OM (Purple over Lime green, over metal) who arrived a couple of days later, being first seen on April 6. 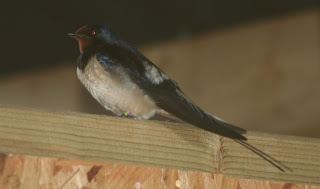 VLOM - still going strong!
Arriving at the stables this year would have been a bit of a shock for the swallows, as when they left in 2010, most of the stables looked like this: 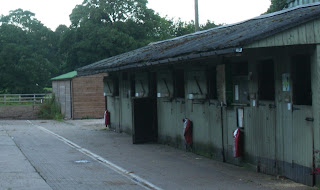 But now they look all shinny (as far as wood can) and new having been replaced over the winter: 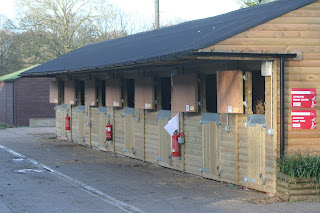 Although this does mean that several nests have been lost the birds won’t be unduly effected. One thing this site has is a lot of mud, hay and horse hair; the perfect materials for nest building.
Both BW:OM and VL: were ringed as adults in 2008, which means they are celebrating at least their fifth birthdays in 2011. Pretty good going considering the average swallow only lives three years or so.
Posted by Cardiff Bird Ringers at Monday, April 11, 2011