Gilbert White, in his Natural History of Selborne, wrote of the Spotted Flycatcher that it:

"...builds every year in the vines that grow on the walls of my house. A pair of these little birds had one year inadvertently placed their nest on a naked bough, perhaps in a shady time, not being aware of the inconvenience that followed. But an hot sunny season coming on before the brood was half fledged, the reflection of the wall became insupportable, and must inevitably have destroyed the tender young, had not affection suggested an expedient, and prompted the parent-birds to hover over the nest all the hotter hours, while with wings expanded, and mouths gaping for breath, they screened off the heat from their suffering offspring."

Some time later, CJ ringed one down at the Bay, a first for the site we believe. 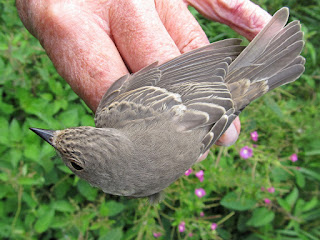 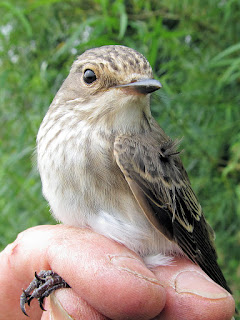