The Cardiff Bird Ringers have been involved with the Gower Tree Sparrow Project (GTSP) for a number of years now. Although our involvement of late hasn’t involved much ringing; we’ve only ever managed to ring three tree sparrows on Gower!
Much of the GTSP’s work centres around Newton Farm, the only known breeding site of the species on the peninsula. Three pairs were discovered breeding at the abandoned farm in 2006. Despite providing dozens of nest boxes, the population stubbornly refused to increase in numbers and in 2010 everyone involved in the GTSP was dismayed when the birds disappeared from .
All hope looked lost for the tree sparrow on Gower, but fellow GTSP volunteer Barrie Swinnerton found one feeding in his garden! Only 3km as the tree sparrow flies from Newton Farm. The solitary tree sparrow was feeding with a flock of house sparrow. 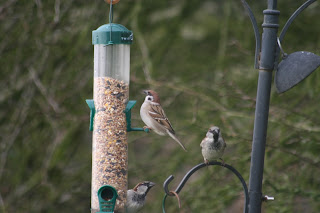 Tree sparrow and chums (photo by Barrie Swinnerton)
Hopefully more tree sparrow will be seen on Gower over the coming months, and hopefully they will return to breed at Newton Farm in greater numbers this year!
Posted by Cardiff Bird Ringers at Monday, February 21, 2011