Waders in the Mist - Updated

Sunday night being still, dry, moonless and hightide-ish, an expedition to the shores of the Severn appeared to be in order. A crack team of three duly assembled, and spent a thoroughly entertaining evening processing 66 Redshank, a Dunlin and a Knot. Four of the Redshank were recoveries, three being colour ringed, probably at RGW a few years ago (we wait for details), the other being ringed by us in the bay back in January. 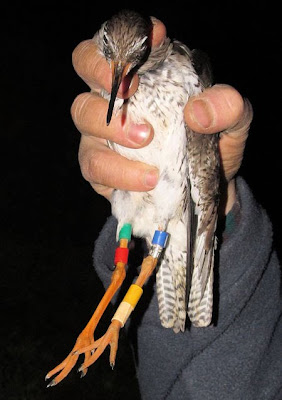 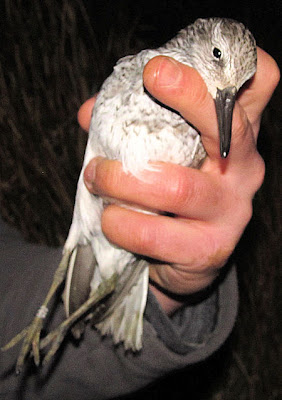 And it got very misty, by the way, so driving back to the road over the fields was quite interesting.

The Redshank in the picture above was ringed at Rumney Great Wharf in March 2009. The other two colour ringed birds we caught were both ringed on the River Taff in October 1999.  BTO Birdfacts tells us that the typical lifespan is 4 years and the maximum recorded age a little over 20 years, so these two are well ahead of the game.
Posted by Chris Jones at Monday, March 12, 2012

Email ThisBlogThis!Share to TwitterShare to FacebookShare to Pinterest
Labels: Redshank