Spurred on by reports of fellow ringers catching Chiffchaffs we headed to the Bay hoping to find the bushes adorned with Phylloscopus warblers. What we of course got was a painfully slow morning. How slow? After several blank rounds we got excited over three retrap LOTTI’s… But all was not lost as we did pick up another snipe.

With British Summertime now here we thought we’d throw caution and expectation to the wind. So on Sunday CJ, Facey, Billy Whiz, Ti and Pliers Morris* attempted another wader catch. It seemed very quiet, with the 300 redshank flying away from the catch site not boding well for the evening ahead. Four mallard provided some entertainment but refused to be caught. The god’s of ringing smiled however, and by the time we’d packed up we’d secured the details of 36 redshank; among them another colour ringed bird and another retrap/control.

*The legend of “Pliers” Morris is one that will be recounted until the end of time. Some will say the pliers were defective. Others that Pliers Morris had, in a moment of madness, summoned the strength of 1000 redshank. All those of us that were there can say is that when he picked up the pliers they had two handles; when he put them down they had one…. He made an excellent scribe. 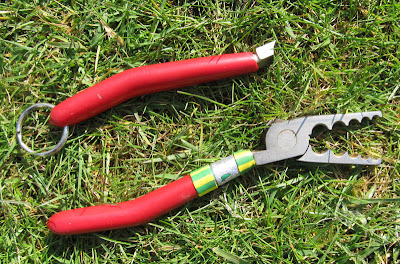