We should apologise for the lack of posts of late but quiet frankly we're not going to. Instead here is a brief update until the normal service of witty posts resumes.

Sunday at the bay provided a good number of birds with two particular talking points. The first was two Redpolls which graced us with their presence. Not a new species to the bay ringing totals but most definitely note worthy. Cue obligatory picture of said species in the hand: 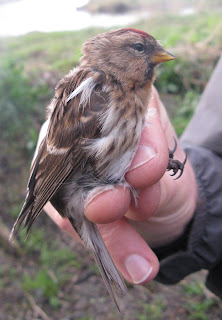 Cello?
The biggest surprise, however, turned out to be one of those Troglodytes things. Wrens are exactly rare, but this one took us a little by surprise. Some head scratching was the initial reaction from a certain Wheatear specialist, as he looked upon a wren with plumage characters of age class 3 but apparently with a re-feathering brood patch. You species specialists! Hey presto it was a three undergoing a body moult. Honestly, what kind of parents rears their young in February/March?
Meanwhile this week a certain Cardiff Ringer, who is known to masquerade as a GP when drunkenly agreeing to join a softball team, scored the group’s first Acrocephalus warbler in the form of a Sedgie at Cosmeston. It’s always good to see the stripey ones back in the country.
One Hirundine obsessed CR has been doing his usual of checking out his favourite rustica site in search of the fork-tailed ones but we are assured this will be covered shortly – you can hardly wait can you…
Posted by Cardiff Bird Ringers at Thursday, April 07, 2011