Saturday was a bit of a finch-fest at the Bay with Goldfinch, Greenfinch and Reed Bunting making up the majority of the session's cast of 20 birds, giving trainee a good number of birds to process. Dunnock, Blackbird, Great Tit and Blue Tit made up the rest. Despite several Cetti’s warbler blasting out their song, none ventured into the net. Nor did the kestrel...
Its nice to think that is a month or so the Bay will be alive with migrants, perhaps having returned from Senegal. Did we mention we'd been to Senegal?

On Sunday, while the others attended to family matters, or recovered from watching win against , CJ ventured to Forest Farm on his tod. The Gods rewarded his dedication with a 43 bird catch which included this long awaited chappie: 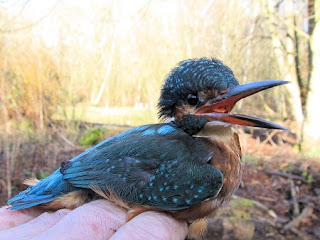 Congratulations go to two of the team’s trainee types:
John “nestbox” Hyde recently received a restricted C-permit for passerine pulli, while Dr O can finally go out and ring proper birds (basically anything that isn’t a wheatear) with mist nets. Their trainer is yet to receive a box of chocolates or a bunch of flowers…
Posted by Cardiff Bird Ringers at Monday, February 27, 2012