And the results were...

Today, the results of the Flat Holm gull count landed in our inboxes, and we think Dr Gull herself (formerly of Cardiff Ringers but currently on loan to the BTO) described it best:

“The 2011 gull count turned out to the lowest year for lesser black-backed gulls since 2000.Herring gulls are also down by approximately 100 pairs on last year, but similar to the figures for the few years before 2010. It will be interesting to see what happens next year!”

And this year’s figures…

And here is a graph that shows what the trend of the lesser black backed gull colony since the sixties: 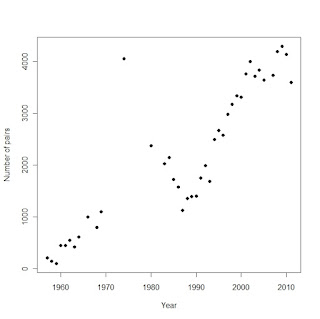 Also during the sojourn on the island, eight adult lesser black backed gulls with DARVIC rings were re-sighted, mainly by Messrs Brian Bailey and David Anderson. Brain sent over the life histories of these eight and those of two of the eldest are reproduced below. Hopefully these show a number of things.

One that these birds are pretty long lived – 15 years is typical for this species (the record stands at 34 years 10 months 27 days).

Two, that they actually are interesting – they just don’t frequent your roof or local rubbish tip but do move around a fair bit. Granted some of the eight had been seen regularly on the Gloustershire landfill sites but they had also gone to like FA76671, as well as and .

And thirdly, how some individually marked birds can be recorded many times where as others, despite their age, can disappear off the radar for more than a decade.