A Lesson in Wet Marshy Places

The wet marshy habitats across Europe and Africa (and probably the world) are similar in lots of ways. They are all usually wet, smelly and jam packed full of blood sucking invertebrates. They will all usually support a range of specialist wetland passerines (and "near passerines") in some form or another.


When you spend much of your working week standing in damp waders, putting up and taking down mist nets, attempting to distinguish chironomidae from dixidae between the occasions when you catch a study bird species in order to collect its "dietary waste"- you gain a sort of insight to some of the differences between marshy wet habitats.


For example, some of these habitats carry less risk of contracting a party list of liver or blood-cell parasites. Some are not surrounded by hundreds of miles of Sahelian arid habitats. Some of them are within a wine-growing country -where you can enjoy the local produce at the end of yet another sunny day after day after day. 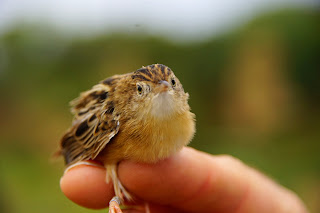 or perhaps a Little Bittern or two.

And a steady netful of introduced species from Africa.

and some typical European migrants. 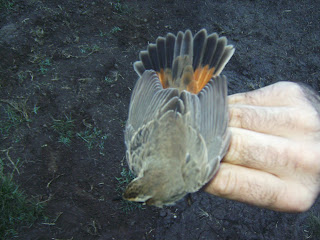 After a full season of catching reed warblers in South Wales- what more could I wish for than a research trip to Portugal to catch some more reed warblers. Suffice to say I coped...
Posted by James Vafidis at Thursday, October 11, 2012