It was a simple plan; a quiet Friday morning coot catch at Cossie was bound to result in good numbers of the species. By now Vaf and Facey should know that such a simple plans are doomed to fail.

It didn't help that Facey was ten minutes late meaning the opportunity to catch in the presence of "Bread Man" was lost. Bread man is a gent that arrives at the lakes and literally empties bin bag loads of bread in to the water. He arrived, he emptied, he left. The birds, full of bread, weren't prepared to come That close.

While we watched crestfallen as the coots kept their distance, we did manage to secure these: 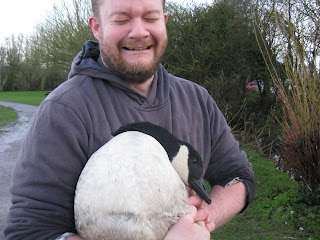 Vaf and Facey were of course disadvantaged by a distinct paucity of coot... 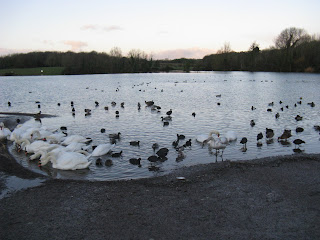 Fingers crossed and warmer socks, we'll be catching more coot in the next few weeks as the weather gets colder...
Posted by Cardiff Bird Ringers at Friday, December 16, 2011