March is not a month associated with plentiful numbers of the South Walian ringers' quarry. Rich, Mike and Adam decided, however, to ignore the probability of failure and make a brave attempt on the dunes of Merthyr Mawr on a bright Saturday morning. On ascending the towering dunes, an array of nets were erected, including a double dog-leg through an area of promising-looking scrub. By promising, we mean not totally hopeless.

Amazingly, the Gods of Ringing smiled kindly on us that day. The three of us were worked hard by the inundation of not five, but six birds over the course of only two or three hours! We barely had time to drink coffee, eat unhealthy snacks and lie around in the sun. Lucky that the flock of goldfinches avoided the nets, or we might have struggled to keep up.

Dunnock, robin and great tit all found their way into the nets. Two dunnocks of different age were caught at the same time, allowing us to compare them in the hand. The eye colour was noticeably duller in the yearling, even though this is a more reliable character in the Autumn (see pics). 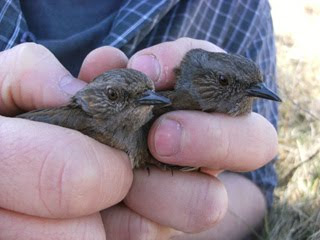 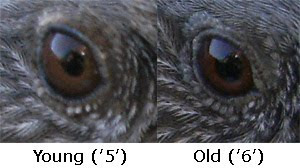 There was quite a difference in the greater coverts betwen the two, but according to the ringing bible (Lars Svensson's Little Green Book), this doesn't really tell you anything. Still, here is a picture of dunnocks with different looking greater coverts: